Increasing Brand-Value of Mailinator.com with a Web Comic

We have been doing some investigation in increasing brand awareness for Mailinator.com.

Mailinator has always been a useful site providing free, disposable email - but analysis of the usage patterns of Mailinator indicated that users tended to use it on a monthly or bi-weekly basis rather than weekly or daily. In some ways this makes sense – the site provides a utility, but the use case for the general public isn't necessarily needed on a daily basis. When it is needed however - our goal is to make sure you think of Mailinator.com!

In order to raise all usage levels of the site, we focused on public awareness of the site, expecting that an increased DAU (and MAU) would/should be an expected side effect.  I’ve frequented many trainings in the last year, and I cannot tell you how many times I’ve heard, “Create interesting and useful content and people will flock to your site…Its all about providing content.”

But what content could we give to our users?  We already give away the service – we have a useful tool, and want more folks to know about it and use it.

Before creating content, something to consider is who is in our user base?  Web analytics told us the primary user base is male, ages 18-40 – think of the average Reddit user.  So how do we engage 18-40 year old men, and potentially other demographic groups?  How do we get them to think of Mailinator.com more often?  What could we provide that would be of use of them?  Getting folks to think of the site more often, and giving them content and reasons to visit the site would likely expand their current usage pattern.

We tried targeted ads through traditional web and social channels. Specifically - we experimented with Google Adwords, Reddit.com, Facebook, and Twitter.  The ads provided momentary increases in traffic to varying degrees but nothing long lasting.  We can get more users to Mailinator any day of the week by spending some money, but that cannot be sustained given that mailinator.com doesn not generate direct user revenue.

During a recent site redesign we incorporated a new mascot of sorts – an amiable looking caped crusader we dubbed “Mailinator Guy” - the Anti-Spam Superhero. 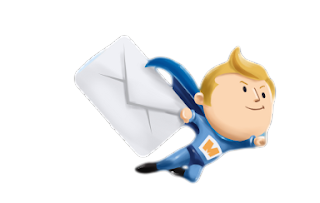 The more we lived with Mailinator Guy, the more often we started asking: what if we launched a web comic based on Mailinator Guy?  Would a comic be appropriate content?  If you've ever read Mailinator's FAQ you know the tone of the site is already quite tongue-in-cheek - we at least amuse ourselves.  Frankly the thought of bringing Mailinator Guy to life was simply too fun an experiment not to try.

ComicRocket has over 35,000 web comics indexed on their site alone, so competition for user attention is stiff.  However we found Facebook ads for the comic to be highly successful in engaging a new audience.  We think it works well because they are demographically targetable, colorful, eye catching and fun.  A thumbnail or portion of the strip is always displayed in the posts and ads.

We also engage our existing audience through the Mailinator Facebook page (with >30000 likes). There is an announcement on the page when a new comic is published. Additionally, the colorful thumbnail version of the strip is shown on the landing page and on mailbox pages at mailinator.com.  We have found as we release a comic each week, we are slowly habituating our audience to check mailinatorguy.com on a weekly basis – and if they are following us on twitter or are a Facebook fan, we have an excuse to contact them. 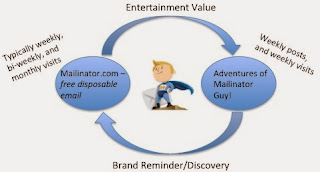 At the time of this writing we have published six episodes of The Adventures of Mailinator Guy. Our advertising efforts, both paid and direct referrals from mailinator.com, have driven traffic that averaged 1,500 unique weekly users the first three weeks, to over 3,000 unique weekly visitors the following three weeks.  The most traffic occurs on Mondays when we have usually posted and announced a new episode.  Along with an increase in users, producing the comic has become more efficient and economical, and still pretty darn fun.

Importantly - traffic to mailinator.com has increased 15% in the 6 weeks since the launch of the comic and continues to grow.

These numbers are very encouraging but honestly the most important outcome is the increase in Mailinator brand recognition. The site's brand value will continue to grow and that's the real goal of this exercise.

At the end of the day - everyone is happy.  More people know about the Mailinator brand - this makes us happy - and have either avoided some spam by using our free disposable email service, have had a laugh at the expense of Mailinator Guy - and his sidekick (you'll have to read the strip to find out about him), or both.

If you're up for following the adventures of Mailinator Guy yourself - here's the link to get you started:

The Adventures of Mailinator Guy!